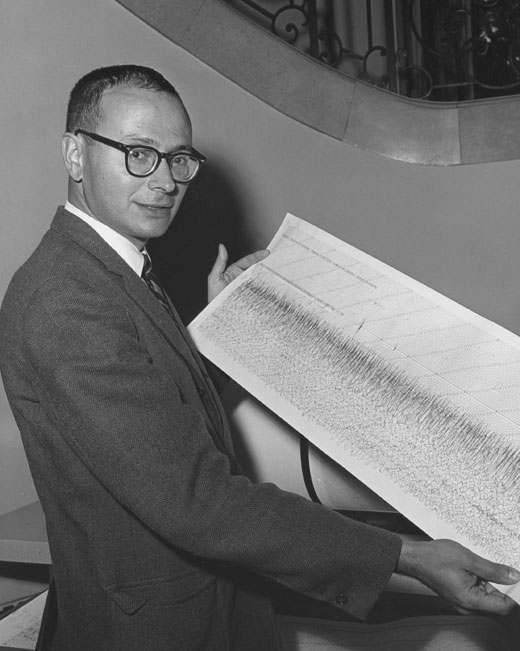 Frank Press, professor of geophysics and director of Caltech’s Seismological Laboratory, displays one of the first seismograms of the great Alaskan earthquake on March 27, 1964. Photo ID 10.41-101

On March 27, 1964, at 5:36 p.m. Alaska time (03:36 3/28/64 UTC), a great earthquake of magnitude 9.2 occurred in the Prince William Sound region of Alaska. The epicenter was about 10 km east of the mouth of College Fiord, approximately 90 km west of Valdez and 120 km east of Anchorage. The epicenter was located at Lat. 61.04N, Lon. 147.73W, at a depth of approximately 25 km. This earthquake is the second largest earthquake ever recorded in the world after a magnitude 9.5 earthquake in Chile in 1960. The duration of rupture lasted approximately 4 minutes (240 seconds). The shaking was felt all over Alaska, in part of Canada, and south to Washington State. The tsunami that followed was the second largest ever recorded—following the Chilean tsunami of 1960. (Source: AEIC: Alaska Earthquake Information Center [archive.org link])

Back in Pasadena, seismologist Charles Richter was alerted by the seismograph in his living room that a big quake was happening. His account of that evening and what followed appeared in the Caltech magazine, Engineering and Science, in the following month. The article, “Caltech’s Seismological Laboratory goes to work on the Alaskan Earthquake,” is available to read here. (Engineering and Science, 27 (7). pp. 7-11. ISSN 0013-7812. April 1964)