Tech’s Trekkies save the day 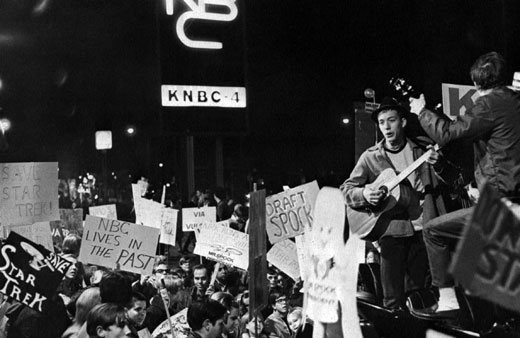 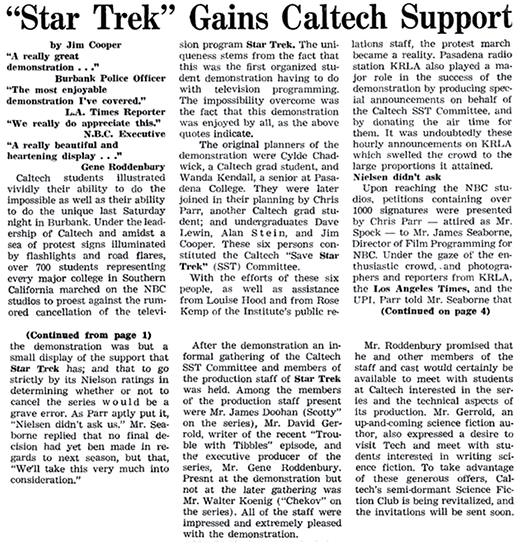 Article on the front page of the student newspaper California Tech, January 11, 1968.

During the second season of Star Trek, when cancellation rumors began to circulate, Caltech’s own Trekkies decided to do something about it. So on January 6, 1968, to save the TV drama, some 200 Tech students took part in a national campaign and marched on the Burbank NBC Studios to protest the show’s possible demise. As was reported by Los Angeles Times’ staff writer Jerry Ruhlow in the January 8th edition of the paper: “Students at Caltech have found little time for demonstrations, protests and draft card burnings rampant on many of the nation’s campuses. But Saturday night, a throng of more than 200 chanting, banner-waving Caltech scholars conducted a torchlight procession through the streets of Burbank to carry a protest to the steps of the National Broadcasting Company.” They marched with placards reading “Mr. Spock for President,” “Sarnoff is a Klingon,” and “Draft Spock.” Alas, the campaign to save Star Trek worked, and the sci-fi drama would boldly go on for a third and final season. The protest, which was planned and lead by 6 Caltech students who formed the Caltech “Save Star Trek” (SST) Committee, became a success thanks to further help from the local radio station, KRLA, who donated air time to the SST Committee for their hourly announcements. After the demonstration, members of the SST Committee were invited to an informal meeting, which included the actor James Doohan (“Scotty”) and the creator and executive producer of the series, Gene Roddenbury, who wished to thank the students for their support. —LK