Two birds with one shot? 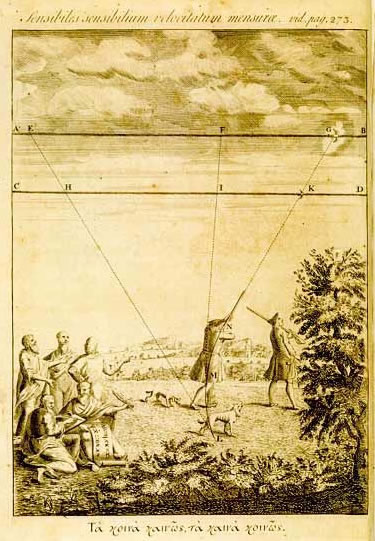 Frontispiece to Isaac Newton and John Colson (editor and “perpetual commentator”), The Method of Fluxions and Infinite Series (Cambridge, 1736). John Colson was Cambridge University’s fifth Lucasian Professor of Mathematics, while Newton was the second. The image accompanied a text that aimed to establish Newton’s priority in the calculus and to respond to attacks on “infidel mathematicians” by men such as George Berkeley. Colson hoped to show that the calculus is a rational and tangible means of expressing real motions in real space. To explain the second derivative, Colson has the reader imagine an attempt to hit two ducks with one shot. The bottom fowl flies at a constant velocity while the top flies with a uniformly accelerating motion, thus representing “contemporaneous fluents.” The “fluent” curve which the hunter’s eye traces represents the second derivative.