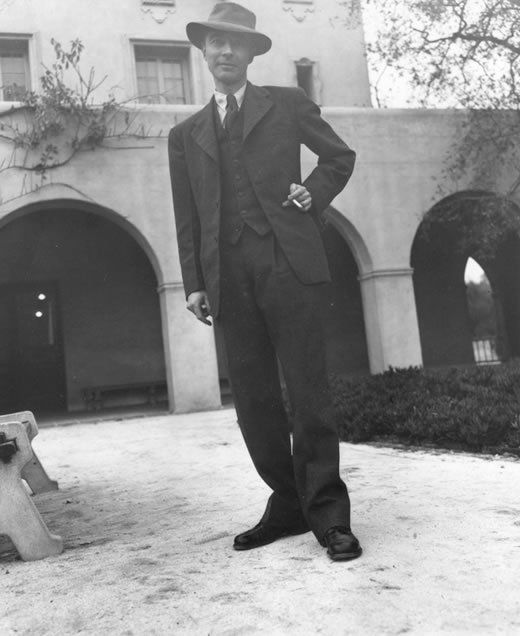 J. Robert Oppenheimer’s association with Caltech began in 1930, at age 26, when he became assistant professor in theoretical physics and taught such advanced courses as Statistical Mechanics, Quantum Theory, and The Quantum Theory of Radiation. Though the majority of his time was spent developing a strong physics department at UC Berkeley, Oppenheimer commuted back and forth between Berkeley and Pasadena throughout the 1930s and early 1940s usually spending one term each year on the Caltech campus. He became a full professor at Caltech in 1938, and continued in that position right through the war years—though from 1944 to 1945 was on leave to the Manhattan Project at Los Alamos. He would return to the campus in 1946 to teach Principles of Quantum Mechanics, before accepting a position as director of the Institute for Advanced Study at Princeton University in 1947. During his years at Caltech, he teamed with Paul Epstein, Harry Bateman, William Houston, and Fritz Zwicky to present a Seminar in Theoretical Physics; Carl Anderson took his course on quantum mechanics; and Robert Christy took his PhD degree with Oppenheimer at Berkeley in 1941.