Interview with Dr. Jay A. Labinger, Administrator of the Beckman Institute and author of Connecting Literature and Science 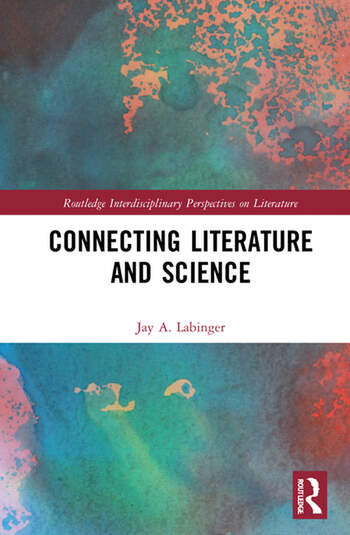 Connecting Literature and Science—the new book by Jay A. Labinger, Administrator of the Beckman Institute—is now available in e-book form through the Caltech Library.

This book presents a case for engagement between the sciences and the humanities. The author, a professional chemist, seeks to demonstrate that the connections between those fields of intellectual activity are far more significant than anything that separates them. The book combines a historical survey of the relationships between science and literature with a number of case studies that examine specific scientific episodes—several drawn from the author’s own research—juxtaposed with a variety of literary works spanning a wide range of period and genre—Dante to detective fiction, War and Peace to White Teeth—to elicit their common themes. The work argues for an empirical, non-theory-based approach, one that is closely analogous to connectionist models of brain development and function, and that can appeal to general readers, as well as to literary scholars and practicing scientists, who are open to the idea that literature and science should not be compartmentalized.

To commemorate its publication, we asked Dr. Labinger a few questions.

Congratulations on the release of your new book, Connecting Literature and Science. You're the Administrator of the Beckman Institute and you were trained as a chemist. How did you become so interested in literature (and invested enough that you'd write a book about it)?

I’ve been interested in literature at least as long as in chemistry, but for a long time (until about 30 years ago) I read mostly recreationally.  I think two main influences (books I read) moved me to be more serious about literary scholarship and to explore connections between nominally different realms: Douglas Hofstadter’s Gödel, Escher, Bach and Richard Powers’s The Gold Bug Variations. The second in particular seemed to speak to me in many ways; I started by writing a review for Engineering & Science, and then discovered the existence of a whole community with like interests, the Society for Literature and Science (it’s since changed its name to the Society for Literature, Science and the Arts). I started going to meetings, reading a lot of works in the field that I heard about, and contributing some talks and essays of my own, which has come to occupy a large fraction (almost all of it, more recently) of my non-administrative time.

What inspired you to write this book?

I’ve produced a number of studies, some published in various places but most just presented at SLSA meetings, not published at all; for the last few years, I was thinking about how they might fit together, hopefully coherently, in a collection. At the same time, my activity in chemistry research was starting to dial down, largely because my main collaborator (John Bercaw) had decided to retire, so it seemed like the right time. Looking back over that earlier work, the theme of finding connections stood out as a sort of guiding principle to how I selected topics, and I decided to try to write a book that would do several things: explain my rationale, survey some of the background and history of work along the boundaries between science and humanities, and present some of those studies (I ended up with seven) both as interesting stories on their own and as exemplars of my approach to the topic. I hoped that would lend some quality of uniqueness, as very few (alas) of those who work in these areas are professional scientists.

Which texts and authors do you use to explore your ideas? How were they chosen?

There has been a large component of serendipity in the selection of topics and works for the individual studies: often a literary work that I happened to read had some interesting science-related content and/or called to mind some particular scientific paper (sometimes one of my own)—or the reverse, a scientific paper reminded me of a literary work; sometimes a group of books that I read in a short period of time (again, largely due to coincidence—no planning usually involved!) seemed to resonate both with each other and with a scientific theme. Thus, for example, during the first few years of the 2000s, I read several books that featured creation of new forms of life (Margaret Atwood’s Oryx and Crake, Michel Houellebecq’s The Elementary Particles, Zadie Smith’s White Teeth, Harry Mulisch’s The Procedure); by further happenstance the latter included a retelling of the golem legend, as did two others, Cynthia Ozick’s The Puttermesser Papers and Michael Chabon’s The Amazing Adventures of Kavalier and Clay. Right in the middle of all that, I heard David Baltimore give a talk on new developments in biotechnology. The combination of events gave me the idea of a talk on “Making New Life” for an upcoming SLSA meeting, and I expanded that into one of my chapters.

On another occasion, I read a chemistry paper that proposed a particular mode of representing (on paper) a molecular structure—one that I vehemently disliked—and in formulating a response I saw an analogy to a comment—another one that I disliked—I had heard at a panel on literary translation, specifically of Dante’s Inferno. Both of those essentially proclaimed that there was only one “right” way to do the representation/translation, so by connecting them I was able to argue against both.  (This is the only study that I have presented and published in both scientific and literary venues, of course suitably adapted to the respective audiences.)

Other works that get major attention in the studies include the afore-mentioned The Gold Bug Variations, some stories by Borges coupled with a more recent South American novel, Edmundo Paz Soldán’s Turing’s Delirium, and Tom Stoppard’s play Arcadia, along with many more, at varying levels of detail.

What did you learn about the connections between literature and science that you weren't expecting?

Not so much in the course of writing the book: as I said, I’d been working up to it over a 30 year period, during which the ubiquity of connections gradually grew more evident. At one point, I was (pleasantly) surprised to find plausible connections to my own chemistry research: some (erroneous) interpretations in an early paper seemed to me clearly linked to issues of recognizing simplicity and/or coded messages that are frequently addressed in literature—even to the arguable point that literary familiarity can be beneficial to effective scientific reasoning (I’m far from the only person who has made such an observation).

Enter your e-mail address to receive notifications of new posts by e-mail.