The repositories of the Caltech Collection of Open Digital Archives (CODA) contain Caltech's institutional collections for faculty research publications and other content supporting the mission of the Institute. We collect, manage, preserve, and provide global access over time to the scholarly output of the Institute, the publications of campus units, and Institute history.

The Archives maintains an online database of more than ten thousand images from our collections. Images relate to Caltech but also to the history of science in general, and they represent people, places, fine art, rare book illustrations, and historic instruments.

This collection documents most aspects of MacCready's personality and career through a diverse array of documents, media, objects, manuscripts, and printed material spanning over seventy years (ca. 1930-2002). Especially prevalent within the collection are papers and ephemera from 1977 to 1985 during which time MacCready was working on his human-powered airplanes, the Gossamer Condor and Gossamer Albatross. The papers also document his work in alternative energy solutions.

​​Donald. A. Glaser (1926-2013) completed his Ph.D. in physics at Caltech in 1950 and was awarded the Nobel Prize in Physics in 1960 for his invention of the bubble chamber. His scientific work transitioned then to molecular biology and later to neuroscience, leading to significant contributions in both fields. The Glaser Digital Collection unites two physical collections owned by the University of California, Berkeley and Caltech. It is extremely rich and significant and includes papers, diaries, notebooks, photos, and slides.

George E. Hale (1868-1938) was an influential astrophysicist and scientific administrator. He quickly established a distinguished scientific reputation for his invention of the spectroheliograph, then made important contributions to the study of solar phenomena. He was the leading figure in the founding of the Kenwood, Mount Wilson, and Palomar Observatories as well as the California institute of Technology, Huntington Library, and the National Research Council.

The Caltech Archives Oral History Project began in 1978 for the purpose of recording the personal memoirs of the distinguished scientists, teachers, and administrators of the Institute. To date, approximately 170 interviews have been completed and most are open to readers in transcript form. Oral Histories Online, begun in the fall of 2002, brings selected interviews to the public in digital form, chosen from the fields of biology and environmental science.

Lab Notes Online presents historic scientific data from the Caltech Archives' collections in digital facsimile. Beginning in the fall of 2008, the first publication in the series is Robert A. Millikan's notebooks for his oil drop experiments to measure the charge of the electron, dating from October 1911 to April 1912. Other laboratory, field, or research notes will be added to the archive over time.

The Caltech Magazine (2017+), formerly known as the Engineering & Science Magazine (1937-2016) and produced by the Caltech Office of Strategic Communications, presents a scientifically literate audience with a lively picture of the intellectual life and research activities at Caltech and promotes interest in science and scientific issues. It is published several times a year. Both current and older issues are hosted on the CaltechES repository.

ENGenious is a publication for alumni and friends of the Division of Engineering and Applied Science of the California Institute of Technology. Both current and older issues are hosted on the CaltechCampusPubs repository.

CaltechCONF contains papers delivered at several conferences hosted at Caltech. We have merged many separate Caltech-hosted conference collections into CaltechCONF. Browse the Conferences in CaltechCONF to find out more. 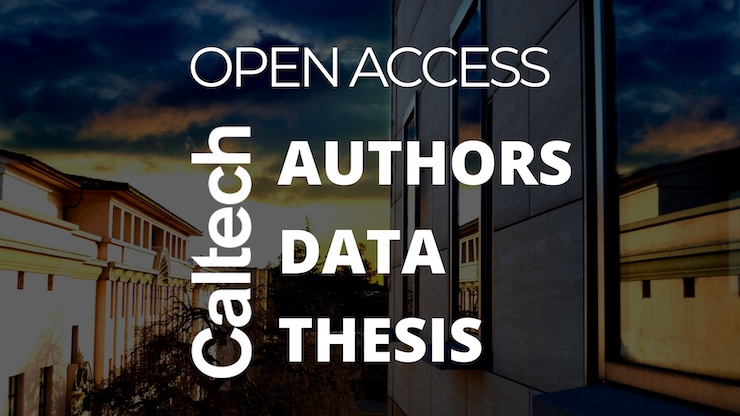